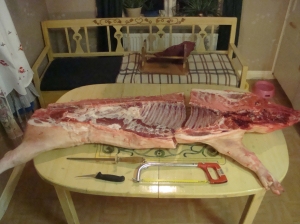 It is the time of year that we buy our winter pig. We ordered a 1/2 pig from a local farm. Our neighbor bought the other half. We decide after discussing it with our neighbor. That this year our neighbor  would pick up the two halves and  delivered one of the halves to us on his way home.  That was two weeks ago. This pig is larger than usual.  I sanitized the kitchen before he came. We made all the preparations to butcher the pig. Nothing we hate worse than running around looking for utensil or equipment  we forgot to set out.  We like to be organized and the process to run smoothly. We do dishes and clean simultaneously as the butchering is being done. Cleanliness is of the upmost importance.

Two of the pans to the left are the fat and skin that I set aside to make lard. A small container of Crisco (1 1/2 cups) here cost about 20 dollars. I refuse to buy it.  I saw a recipe on Pinterest on how to make Lard. I thought we can try to follow the recipe and see how it turns out. I thought if we fail at making it, what did I lose except my time. I  figured I would just go back on the net and find another recipe and try it on next years pig.

The Bowl on the right are meat scraps saved for grinding in to hamburger meat. We use to throw away all the fat, skin and bones.  You would be shocked how much we wasted before we made lard, bone both, dog food. We have learned that we can get  more meat off the bones, if we boil them. We  make bone broth at the same time. We save all the bones, skull and boil it down in a large pot to make bone broth for the dogs. You would be shocked how much meat comes off those bones.

Posted on December 17, 2016, in Everyday Life. Bookmark the permalink. Leave a comment.