Happy Halloween Everyone! We are traveling out-of-town to celebrate Halloween and I won’t be back on-line until Monday.

Politician dies and goes to heaven…

A politician dies and ends up standing in front of the pearly gates. Saint Peter looks at him for a second, flicks through his book, and finds his name.
“So, you’re a politician…”

“Oh no, no problem. But we’ve recently adopted a new system for people in your line of work, and unfortunately you will have to spend a day in Hell. After that however, you’re free to choose where you want to spend eternity!”

“Wait, I have to spend a day in Hell?!” says the politician. “Those are the rules,” replies St Peter, clicks his fingers, and WOOMPH, the guy dissapears. He awakes, curled up with his hands over his eyes, knowing he’s in Hell. Cautiously, he listens for the screams, sniffs the air for brimstone, and finds… Nothing. Just the smell of, is that fabric softener? And cut grass, this can’t be right?

“Open your eyes!” says a voice. “C’mon, wakey wakey, we’ve only got 24 hours!” Nervously, he uncovers his eyes, looks around, and sees he’s in a hotel room. A nice one too. Wait, this is a penthouse suite… And there’s a smiling man in a suit, holding a martini. “Who are you??” The politician asks.

“Well, I’m Satan!” says the man, handing him the drink and helping him to his feet. “Welcome to Hell!”

“Wait, this is Hell? But… Where’s all the pain and suffering?” he asks.

Satan throws him a wink. “Oh, we’ve been a bit misrepresented over the years, it’s a long story. Anyway, this is your room! The minibar is of course free, as is the room service, there’s extra towels next to the hot-tub, and if you need anything, just call reception. But enough of this! It’s a beautiful day, and if you’d care to look outside…”

Slightly stunned by the opulent surroundings, the man wanders over to the floor-to-ceiling windows through which the sun is glowing, looks far down, and sees a group of people cheering and waving at him from a golf course.

“It’s one of 5 pro-level courses on site, and there’s another 6 just a few minutes drive out past the beach and harbour!” says Satan, answering his unasked question.

So they head down in the lift, walk out through the glittering lobby where everyone waves and welcomes the man, as Satan signs autographs and cheerily talks shop with the laughing staff. And as he walks out, he sees the group on the golf course are made up of every one of his old friends, people he’s admired for years but never met or worked with, and people whose work he’s admired but died long before his career started. And out of the middle of this group walks his wife, with a massive smile and the body she had when she was 20, who throws her arms around him and plants a delicate kiss on his cheek. Everyone cheers and applauds, and as they slap him on the back and trade jokes, his worst enemy arrives, as a 2 foot tall goblin-esque caddy. He spends the day in the bright sunshine on the course, having the time of his life laughing at jokes and carrying important discussions, putting the world to rights with his friends while holding his delighted wife next to him as she gazes lovingly at him.

Later, they return to the hotel for dinner and have an enormous meal, perfectly cooked. As everyone is falling about laughing and flinging bread sticks at each other, his wife whispers in his ear… And they return to their penthouse suite, and spend the rest of the night making love like they did on their honeymoon. After hours of passion, the man falls deep into the 100% Egyptian cotton pillows, and falls into a deep and happy sleep… and is woken up by St Peter.

“So, that was Hell. Wasn’t what you were expecting, I bet?” “No sir!” says the man. “So then,” says St Peter. “You can make your choice. It’s Hell, which you saw, or Heaven, which has choral singing, talking to God, white robes, and so on.”

“Well… I know this sounds strange, but on balance, I think I’d prefer Hell,” says the politician. “Not a problem, we totally understand! Enjoy!” says St Peter, and clicks his fingers again.

The man wakes up in total darkness, the stench of ammonia filling the air and distant screams the only noise. As he adjusts, he can see the only light is from belches of flame far away, illuminating the ragged remains of people being tortured or burning in a sulphurous ocean. A sudden bolt of lightning reveals Satan next to him, wearing the same suit as before and grinning, holding a soldering iron in one hand and a coil of razor-wire in the other. “What’s this??” He cries. “Where’s the hotel?? Where’s my wife??? Where’s the minibar, the golf-courses, the pool, the restaurant, the free drinks and the sunshine???”

“Ah”, says Satan. “You see, yesterday, we were campaigning. But today, you voted.” 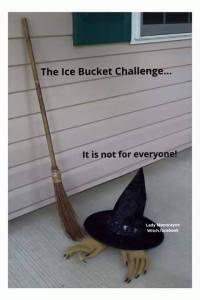 When we entered the grounds we saw a stone that said “Tänk på döden”, which means Think about Death. I have never seen such a sign before outside of a church. 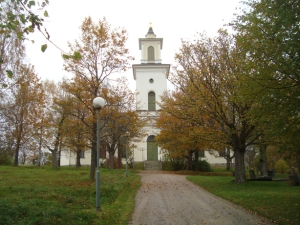 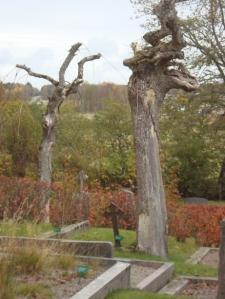 Posted in Harmful to your health

Something to think about; 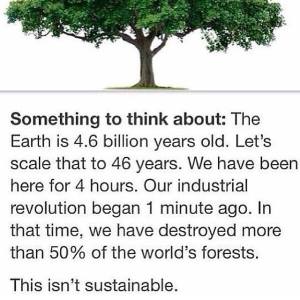 Where the road bends
Stir It Up!