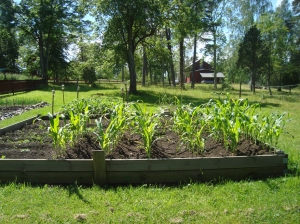 My flower beds are in full bloom

My herbs and spices are doing great. 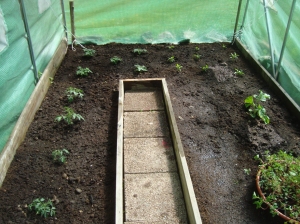 Beef tomatoes, cherry tomatoes, Bell-pepper and cantaloupe are doing good. I have flowers to transplant. We are hoping for a great summer harvest this year. 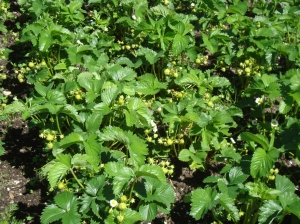 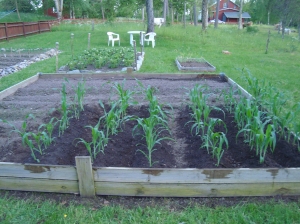 We had friends over for Midsummer for Paella.Hubby  dug a whole and saved the grass. Hubby placed it in the wheel barrel for later. He placed bricks around the opening to make it level.

We started the fire and began to cook.

You can learn how to make Paella under recipes. I think it taste better, when cooked on an open flame. It was delicious and everyone had a great time.

We only had a small gathering so I did not use as many cray fish as usual.

3 beds out of 4 have been planted

The onions are coming up nicely. 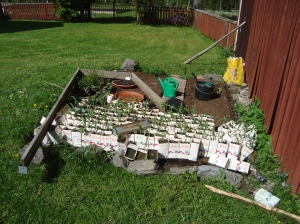 I was sitting in the livingroom watching TV, when the satellite dish went out. The TV screen went black. I looked out the window to check the satellite dish, when I  see the Poly-tunnel laying on its side against the little apple tree. I yelled to hubby what had happened as I ran outside. Hubby arrived a few minutes later with the camera. I had already flipped the Poly-tunnel upright and had straighten out most of the frame, when he took these photos. I was trying to wrangle the covering. The wind was ripping it from my hands. Two branches were damaged on the apple tree.

We were in shock that the winds pulled up the raised bed inside the Poly-tunnel. The sun was shining, but the winds were enough to knock us over. Our neighbor helped us fight the winds and put the covering back on the frame.

It moved the satellite dish out-of-place ,when the frame struck it. We placed all the plants against the red building to shelter them from the high winds. It was difficult to hold it in place as hubby tried to anchor it. 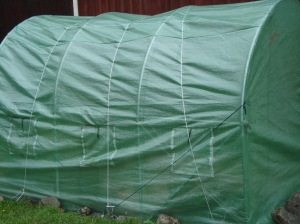 We have heavy rocks on the bottom frame. We anchored it in four places with nylon string on the outside.

We anchored it with nylon string in four places to the metal frame. The raised bed was anchored into the ground by stakes to begin with, but the winds just pulled them out of the ground. The covering was  ripped in places. We just duct taped it back together. 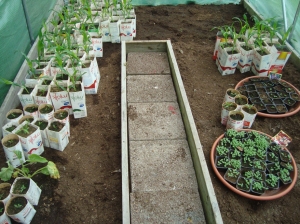 Trees are down every where in our area.  What was surprising to me was that our plastic picnic table and chairs in the back yard  were undisturbed.We have had high winds off and on all week.