← Potatoe Box
Veiws of the changes we made to the Garden →

I tried to read all the seed packages for their recommended spacing and count out how many rows we would need for planting. I didn’t account for how much space we needed for the poles for the cucumbers, beans and peas. It was a tight squeeze. My hubby found it hilarious watching me struggle to get my big rear end between two really tight rows with poles.

We decided to experiment by placing corn between the potatoe rows. This actually worked pretty good. We live on a hill with a lake on two sides of us. We get a lot of strong winds. Last year this was a problem for our corn, bellpeppers and eggplant. My hubby fought last year trying to keep our corn standing. We hoped that since the potatoe plants are quite high that they would provide the extra support the corn needed to with stand the wind. Seems once again my Hubby was Right. 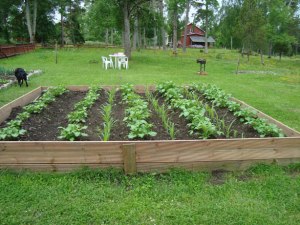 We were really successfull with both the corn and potatoes. My Hubby was displeased with the corn because we had such a cool and rainy summer that year. We were lucky that we had such a good crop. Alot of farmers in Sweden lost their potatoe crops due to all the rain. Since our potatoes were above ground level the monsoon didn’t affect them quite as bad as it did all the other farmers around us. Tractors were stuck in muddy fields everywhere and the crops rotted in the fields because they couldn’t be harvested.

I cut the corn off the cob that didn’t mature fully and froze it in bags. It was great to use in soups and corn bread. 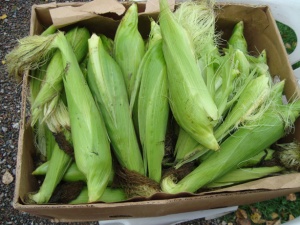 Posted on January 26, 2014, in Gardening. Bookmark the permalink. Leave a comment.

← Potatoe Box
Veiws of the changes we made to the Garden →